A public installation in the Dovecote at Snape Maltings Suffolk England. This installation was designed to be interactive, playful and produce results quickly but also reward prolonged interaction, especially with other people. It features five stations, a conductor and four players, and uses ultrasonic sensors, buttons and knobs to control samples of the Aldeburgh World Orchestra players which have been transformed by the system. I was the lead artist on this project and have built and programmed the technical setup. Ed Perkins programmed the computer and dealt with the sound and lights. University of Hertfordshire Modelling and Special Effects students designed the structure. See their blog here. 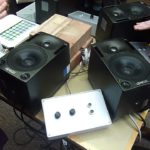 Screen (not visible to user) 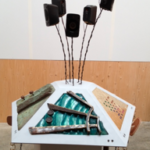 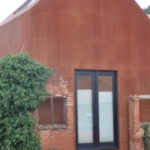 Dovecote, Snape, where Conductable was shown. 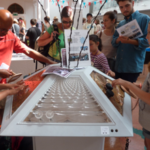 Conductable at the Maker Faire, Brighton 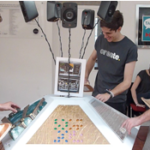 Conductable at the Maker Faire, Brighton

The Aldeburgh World Orchestra (AWO) was formed as part of the Cultural Olympiad for 2012.  As part of this project the Education Department at Aldeburgh Music (AM) ran the Exchanging Worlds Project (ExWo) working with young people from Primary, Secondary, Youth Offending and Further Education backgrounds.

Taking inspiration from the AWO, working with a variety of sound artists, the groups deconstructed and reconstructed the concept of the Orchestra using samples from the AWO auditions. The products from this work were a series of installations on site at Snape Maltings, home of Aldeburgh Music and it’s famous Concert Hall for July/August 2012.